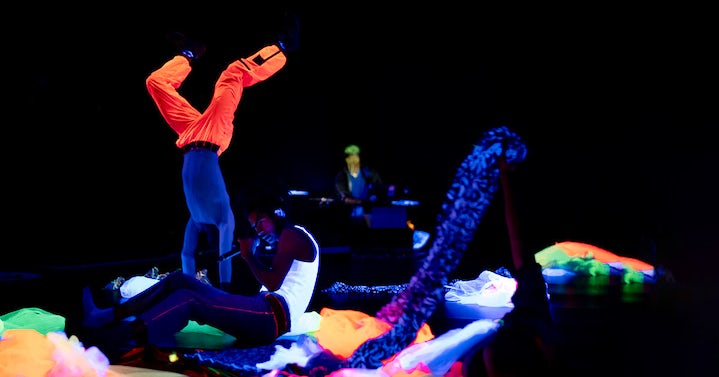 Coloured Swans 3: Harriet’s reMix is a dance performance that forms the third part in Moya Michael’s Coloured Swans series. For this piece, Moya collaborates with four young creatives – Loucka Fiagan, Oscar Cassamajor, Milo Slayers and Zen Jefferson – and investigates the future in relation to the past and the present .These young performers represent the future, carrying with them visions of hope and alternative worlds, while also maintaining a dialogue with their ancestors. A sub-Saharan African proverb says that we stand on the shoulders of giants. But what if we cannot tap into the greatness of our ancestors to guide us safe and sound into the future?

The performance goes deep into a multitude of themes, posing questions about spirituality and displacement and the three-unity – an exploration of the non-linearity of time. Coloured Swans 3: Harriet’s reMix is firmly set on the crossroads between West Europe and Sub-Saharan Africa.

The performance also questions form and theatre. Why do we choose to put our bodies in a black box? How can the three bodies become one, and thus, a solo? How do projections put on some bodies impact their performativity? The entire piece is set in a space with continuously changing borders, allowing the performers to use the space in any way they want. Expect another lush tapestry of images, sound and movement, put together by the same artistic team that helped Moya create her first two deeply riveting Swans.